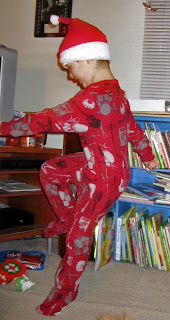 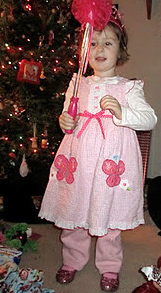 Posted by Nancy/BLissed-Out Grandma at 5:11 PM

I took my granddaughter to the Nutcracker some years ago. Alas, I can't afford to take my three great granddaughters. It's gotten too expensive!

I love the pictures of you little Christmas dancers.The dancing elf picture is priceless. I have taken my oldest granddaughter to "The Nutcracker" a couple of times and we both loved it.

Yes those pictures are priceless, and you are giving them a gift that will only grow as they do. Thanks for sharing their joy! :-)

What fun to watch them dance! ViMae's outfit looks so pretty! :)

I loved these photos. You are giving them gifts that will last a lifetime.

I agree with RET--these gifts will last a lifetime. Your photos are lovely, as always! Happy New Year to you and your beautiful family! xoxo

What a lovely and fun post! I love that they were dancing themselves while watching it at home. Definitely memories for a lifetime. Thanks for visiting my blog earlier too. :) Have a wonderful New Year with your family...Angela

So sweet. I hope they dance for a long time...

They are adorable! Happy New Year to you and your family x

they look so cute!:)

so cool! and you are such great grandparents to expose them to the arts. my niece danced in the nutcracker for years, starting when she was 6 and working her way up to the lead role. i learned that dancers call it, in an offhand, "we aren't excited by anything anymore," blase way, "the big nut."

but secretly, she was always excited. of course.

I think it's absolute genius that area troupes are offering snippets of The Nutcracker instead of forcing children to sit through the entire thing. That is a fabulous idea! And it encourages them to build their love for ballet without punishing them for not being able to sit through 2 hours of dance.

The dancing elf is one of the best things I've seen all season. It's so cool that those kids love dance and feel free enough to express themselves in dance. It's also really cool that the adults in their lives are paying attention.

Dancing children without inhibitions...I love that as well.

Happy New Year to you and your family. May it bring you peace, health, love and happiness.

This could be one particular of the most beneficial blogs We have ever arrive across on this subject.

When your kid loves ballet, enroll her in a ballet school.

I simply wants to say happy New Year to you and your family. May it bring you peace, health, love and happiness.

It will be some time before they are old enough to sit through a full-length performance.