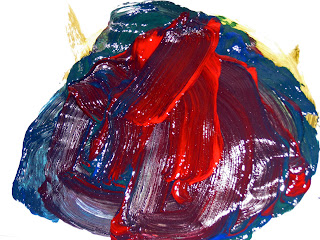 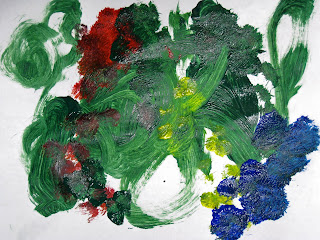 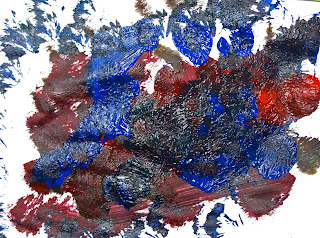 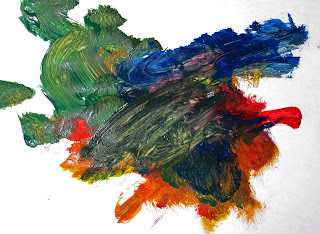 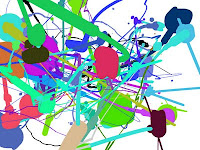 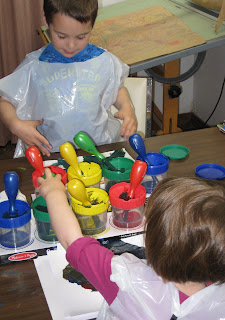 Posted by Nancy/BLissed-Out Grandma at 12:32 PM

How wonderful that you encourage free expression for their art. I like their use of color. We had a similar series of finger paints with my grandchildren when they were younger and they ended up covered in paint (literally) but deliriously happy. Works for me.
Be kind to yourself for the next couple of days. Peace to you and your family.

Great fun and great art....suitable for framing I would say.

Their art IS very expressive. What a great way to spend time with them.

I have always enjoyed seeing my kids engrossed in art, crafts, games, and reading. And I like to join in, too!

Hey, those are pretty darn good. It's so nice to see kids painting with actual brushes and paints and not on a computer.

And my sympathies on the passing of your father. Hugs...

I love their art, and I think you should join them in exploring your own artistic side.

We will think of you with loving thoughts for peace and comfort for the next few days.

Wow! I think Augie's "salad" looks like a garden. But they are all quite interesting and free flowing. Thanks so much for sharing them!

That is Exactly what this world needs; more budding artists. Art matters, and how great it is to teach that early and with a hands on approach. Anything is Possible.

What a wonderful thing to do with children. It gives them a chance to express themselves and have fun. Love those works of art!

As someone married to an artists who also teaches art to children, I can only applaud and enjoy this posting.

Nice to be back in the Blogworld after 6 months away. :)

Hey Nancy! Augie's a talented lad. That fourth one's a doozy, and I'd happily hang it on my wall. Indigo x

I love their art! And you've made me want to do some finger painting of my own. :-)

Sending prayers your way as you say goodbye to your dad.

The kids have done a wonderful job! You are an awesome grandma! So glad you posted the name of the paint brushes and paint. I should get some for Bryson!

Ha! I love that from ViMae: "A pattern." That's one smart cookie. Awesome art for displaying and enjoying. Thanks for sharing!

Looks like fun to me! They are both very artistic..you can scan some of their "artwork" and then print them out as 4X6 photos for them to put in a scrapbook!
I am thinking of you and your family:)

I love having my kids paint! They make such a terrific mess and I find the whole thing very entertaining!

What a fun Grandma you are!!!

Love the pictures (o:
My little 3 year old GD mixes so much together that it turns brown....ugly brown....but she will not take my advice. She wants it that way (o:
Butcher paper has worked pretty good for us.

I was so touched to read your post about your dad. He sounds so much like my Father in law. Strong... but so willing to let his wife direct life. maybe that was just the way it worked then. My dad died when i was three...and my mom never remarried....so I don't know.
My MIL is going through the congestive heart failure. She was in the hospital for more than a month and home now....but she is 89 and not doing that great. It is wearing my FIL to a frazzle and will knock him down soon if things don't change. We are 700 miles away, but have been out there once during this. I think they need to get off of their 3 acres in MO and move to assisted Living.... now one seems able to make that happen.

Anyway, bless your heart. No matter the age....it is hard to deal with the death of a parent.