Will the real Matt Nokes please stand up?

It's all about kids today; grownup stuff returns later in the week. Sometimes at Wild Rumpus Daycare for Grandkids, we find ourselves remarking on (or marveling at) new things that the kids seem to be doing. Some show new skills or levels of thinking; some are just funny or heart-warming.

Vi has a new obsession: Matt Nokes. The real Matt is a former major-league player we got to know when he joined the St. Paul Saints. When he came back into the league as a manager and coach for a few seasons, he'd always visit with us. We mentioned to Augie that Matt was both a catcher and a pilot--two of Augie's favorite things. (Matt once made an emergency landing on a California freeway.)

When the Duplo airplane came with a pilot that wore a cap, he became "Matt Nokes." Vi fell in love. She runs into our house singing out, "Matt Nokes, where are you?" She hugs him, pretends to change his diapers several times a day, and drops him into the pack-and-play for her naptime. Now her mom reports with considerable amusement that Matt Nokes resides at their house, too, where he is a little Fisher-Price girl in a yellow dress and a lei.

The kids' attention spans have really expanded as they play with the Duplos we got for Augie's birthday couple of weeks ago. The bus, train, and airplane sets invite them to make up scenarios, and we use the big sets of plain blocks to build garages, airport towers, city buildings, and sometimes just the tallest stack of blocks they can manage. Their manual dexterity seems to improve a little every day.

On Friday we went to story hour at Barnes & Noble. The place was packed--32 kids and their grownup companions--but Augie and Vi very independently found spots at opposite ends of the little benches and sat through about 20 minutes of storytelling before coming back to sit by us. Augie was content to continue listening, while Vi pulled a book off the shelf and thrust it at Pa: "Read it." She's very direct. 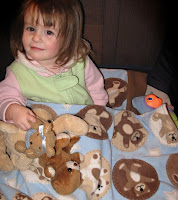 After the kids' swimming lessons Saturday, we all met up at the indoor playground. Augie ran for a bit, and then sat quietly between his mom and me. "Mom and Grandma," he said solemnly, "I am very sorry to leave you sitting when Daddy and I came from swimming lessons and you and Pa and Vi were waiting for us here." What? He carefully repeated it. Apparently he'd gotten sidetracked on the long walk through the halls and his Daddy pointed out that they were meeting us. Nothing dramatic. But Augie processed it and made a point of apologizing. It really makes us wonder what else he thinks about in the long moments when he goes quiet and chews on his lip. Sometimes when he does it, Pa says, "Look, Augie's being introspective." Sometimes he just stays deep in thought. Other times he gives a little grin, as if to say, "Old people are so cute, I have to humor them." 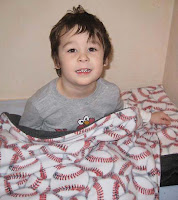 And because I don't have pix of the stuff I wrote about, I'm including these of the fleece blankets and pillowcases I made for naptime--teddy bears for her and baseballs for him, with a plain color for the blanket back and pillow edge. They seem to be a hit.
Posted by Nancy/BLissed-Out Grandma at 11:32 AM

Ah, grandchildren and Duplos... a winning combination! I spent many similar joyous hours playing with my son and his trains... we especially enjoyed playing cattle rustlers with his Playmobil train set. Great memories!

What a fun weekend!

Oh I love when you write about your grandkids!! How old are they again?

They are just adorable. You are so fortunate to have them, and I get a lot of vicarious satisfaction thinking about them, too! I never heard of Duplos before.

What weekend, though I must say I was exhausted just reading this! I love the energy and delight you have in each of these wonderful events. Thanks for sharing them!

Kids attention spans are peculiar. Things we all happily sat through as kids are immediately tiresome, but they can stay glued to a Nintendo for five hours without blinking. That said, I jealous - I would have loved a Nintendo when I was a kid.

I'm always amazed at the insights you gain from your grandkids. It speaks well of you.

Your posts make me look forward to having children (and then grandchildren) someday.

Cute kids! Duplos were a favorite at our house too..then leggos..stuff for the imagination! You made some lovely nap time blankets! :)