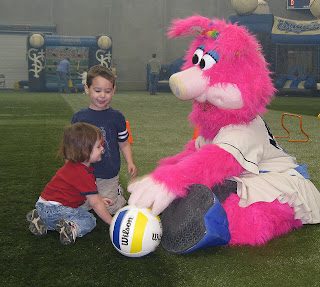 Augie and Vi took their parents and grandparents to the open house at the St. Paul Saints sports training facility today. Wow, it's a huge and fantastic place, dreamed and created by our friend Lamarr. There were footballs and soccer balls and tee balls and tennis balls, and Augie played with all of them. Vi was having a good time kicking the ball with the soccer coach (who plays for the Thunder) until he actually said "Hi." Oops, meltdown. He didn't give up, though, and eventually they got a nice little game going--as long as he kept his distance and Mommy stayed close.

What a difference when Mudonna showed up. Instant love! They played peekaboo and catch, and before long Vi climbed into her lap. Augie ran around the whole place picking up soccer balls and bringing them to the big pink pig as gifts. The kids are always excited to see Mud at the ballpark, but they've never had this much up-close-and-personal time. Whoever was in the suit today did a great job with them. (Mudonna is played by different people, who have different schtick. In summer 2008, Mudonna would do a great big sneeze, which cracked Augie up. Never happened in '09, but for most of the summer he still said "Achoo!" when he saw the mascot or a picture of her.)
Posted by Nancy/BLissed-Out Grandma at 7:17 PM